A Few Pots From my Collection

To start off this blog, Id like to show a few pots from my collection from some of the Japanese potters we’ll be featuring here in the coming months. I must apologize for my mediocre photography, collecting pots is nothing new to me…photographing them is. 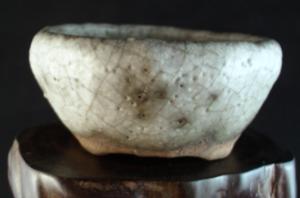 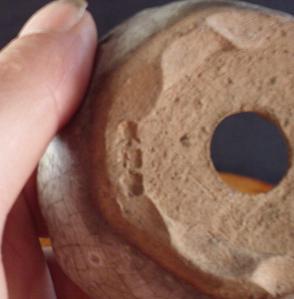 I like this pot a lot.  Excellent patina where the glaze meets the clay toward the bottom, as well as in the crazing and flaws in the glaze.  Clear, undamaged chop.  Nearly seamless joining of the simple hand pressed cut feet.  All in all, a good example of the pottery of Tokufuji Sr., a potter whom we will be featuring extensively in the coming months. 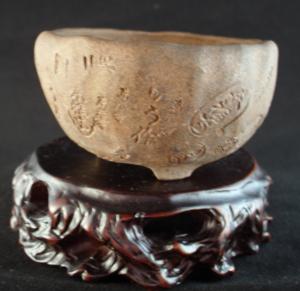 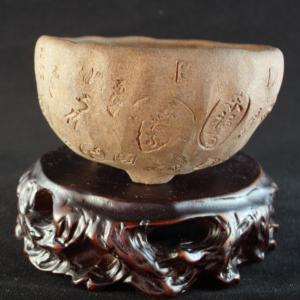 Heian Tofukuji 2nd Generation, other side

This pot is one of my current favorites in my collection. A Heian Tofukuji 2nd generation homage pot, hand formed with cut feet. This pot features all of the Hanko used by Tofukuji, both first and 2nd generation, made with the original stamps. Not only interesting as a collection piece, the pot is a kind of Rosetta stone of Tofukuji Hanko…given the many forgeries out there, this is dead useful! 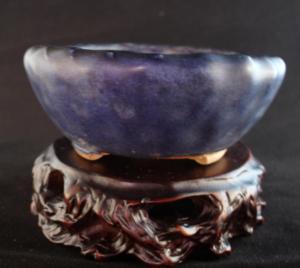 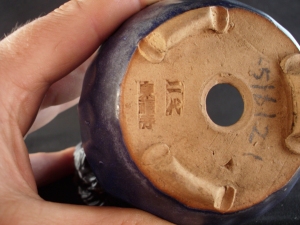 Another 2nd Generation Tofukuji small pot. Used with a Trachelospermum in Gafu Ten 31(page 136 of the album), I like this hand formed pot for a couple of reasons. The glaze is well applied, and clear. The color is nice, a darker blue that contrasts nicely with Bonsai with darker green shades to their leaves, or trunks. A nice patina is beginning to form as well. 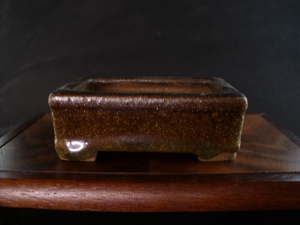 A pot by Aiso, a late 19th and early 20th century potter. The Hanko on this pot is severely damaged, and it was only through multiple rubbings and measurement comparisons of the chop, along with matching the glaze(which is quite unique) and clay to other pots by Aiso that it was positively identified. I love the thick glaze with its unique colours, which creates soft lines on what would otherwise be a masculine shape. 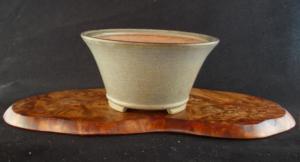 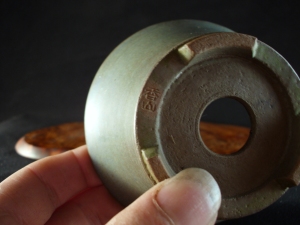 A post war pot by Heian Kouzan. As fellow collector and friend Matt Ouwinga originally taught me, post war pots by Kouzan are made with an orange clay, while the clay body in pre war pots is white. I like the clean lines of the feet and the body of this pot, as well as the mild green glaze.

In future posts I will show and discuss the work of these potters and many others in more depth, featuring examples from American and Japanese collectors, as well as the collected pots of Yorozu-en, a fantastic Japanese Bonsai Nursery, whose masters, Hukano Shigeru and Hukano Ayumu are the Union Director and Executive Director of the Japanese Asscociation for Bonsai Pieces(pots and bowls). I thank both of them, along with Fukano Akatsuki, deeply for the privilege of using the images of the bonsai pottery they have bought and sold through the years to further knowledge here in the States.

I've been collecting Japanese Bonsai pots for a few years, and feel that the famous, and some of the lesser known but great Japanese pot artists could do with a little more writing and exposure in English. Additionally, this blog will feature My own And others bonsai for discussion. The purpose of this blog is to further knowledge of Japanese pottery and Japanese style bonsai. If you have any questions about Japanese bonsai pottery, or would like to acquire pots by some of the potters presented in the blog, feel free to email me at gastrognome@aol.com
View all posts by japanesepots →
This entry was posted in My Personal Collection. Bookmark the permalink.

3 Responses to A Few Pots From my Collection