Here’s a Tofukuji pot that I picked up last month, and even after staring at it for a month, I’m at a loss as to whether it is a first or second generation. The glaze, patina, method of attachment for the feet, clay type, and both chops are all First generation Heian Tofukuji(although Jr often didn’t mark his pots as second generation). The only detail that points to it being a second generation Tofukuji is the depth of the smaller chop to the left, which is uncommon for First generation Tofukuji(though I have seen a couple), but very common for Second generation. It measures 4.5″ by 4″ by 1.5″.
Either way, it’s really just a matter of value, as it’s an awesome pot with awesome patina any way you look at it. If it is a second generation, it’s probably the best example I’ve seen of Kiln changed glaze work from Jr. The pot is hand formed, and has some fingerprints left in the clay….perhaps…. 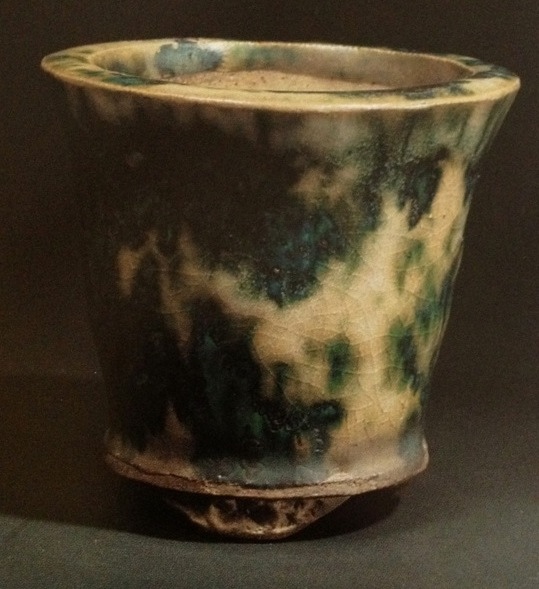 The only other Tofukuji I’ve seen with a similiar glaze, a first generation from the Hatanaka book. 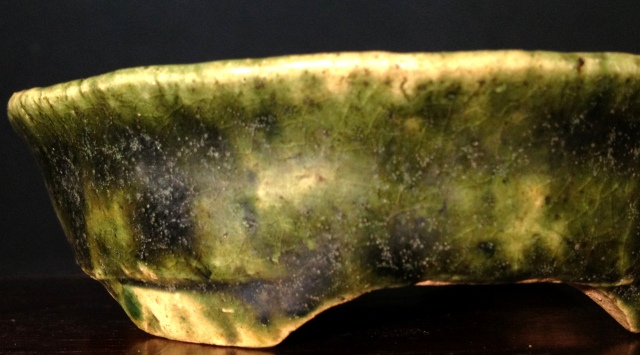 I've been collecting Japanese Bonsai pots for a few years, and feel that the famous, and some of the lesser known but great Japanese pot artists could do with a little more writing and exposure in English. Additionally, this blog will feature My own And others bonsai for discussion. The purpose of this blog is to further knowledge of Japanese pottery and Japanese style bonsai. If you have any questions about Japanese bonsai pottery, or would like to acquire pots by some of the potters presented in the blog, feel free to email me at gastrognome@aol.com
View all posts by japanesepots →
This entry was posted in Famous and Antique Potters, My Personal Collection. Bookmark the permalink.