Posted on January 9, 2013 by japanesepots

Every year I anxiously await the photos from each Shohin Bonsai Kobachi Exhibition. It’s an exhibition where modern potters who specialize in small pots, both very well known and relatively unknown, pro and talented amateur, show their current work and the direction their pottery is going. If you look closely, you can begin to see emerging trends of popularity and appreciation, when certain potters are given the chance to show multiple works after winning one of three awards.
In 2010 Shunka Shozan had 6 pots up on display, as did Shigeru Fukuda of the Bushuan kiln, both potters I’ve posted about quite a lot here on the site(I have an admitted addiction to both). In the 2012 show, I was happy to see some pots from Shigeru Zyubei, another favorite who I posted about well over a year ago, it’s nice to see that he’s getting more recognition than just mine(I don’t think he showed his better work at this exhibition though, unfortunately).
Many expected potters were showcased, Koyo Juko, Gekkou, Shihou, Eime, but I was surprised that some were not, notably, Ikkou and Tonyo.
Newcomers whose pieces I enjoyed seeing especially were 土筆窯(DoHitsu Kiln, 9 pots showcased including some with Demon feet, and others with interesting glazes) and the son of Owari Yuho(last potter on the list).
Have fun looking through this years exhibition, and follow the link below, I think Urushibata San planned an interesting one! 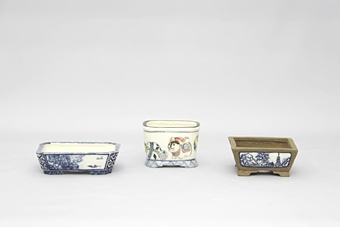 I've been collecting Japanese Bonsai pots for a few years, and feel that the famous, and some of the lesser known but great Japanese pot artists could do with a little more writing and exposure in English. Additionally, this blog will feature My own And others bonsai for discussion. The purpose of this blog is to further knowledge of Japanese pottery and Japanese style bonsai. If you have any questions about Japanese bonsai pottery, or would like to acquire pots by some of the potters presented in the blog, feel free to email me at gastrognome@aol.com
View all posts by japanesepots →
This entry was posted in Modern Potters, Pot Info, ID, Hanko, Books, ect.. Bookmark the permalink.

1 Response to The 2012 Kobachi Exhibition