Heian Tofukuji is considered the epitome of Japanese style and taste for bonsai potters. Perhaps no one has been more influential in the development of contemporary Japanese style of bonsai pottery. We’ve looked at him a great deal before on the site, and today we’ll take a look at a few more glazed pieces, and in another post this week, we’ll look at some images of trees in Tofukuji pots from major exhibitions. For more history on Tofukuji, and other pots, take a look back at these posts:
Glazed Pots by Heian Tofukuji
Glazed Pots from Heian Tofukuji 2
Glazed Pots from Heian Tofukuji 3
A few more interesting tidbits have surfaced since those posts. For example, Tofukuji clay: the pitted and rustic look on many Tofukuji pots likely comes from “chamotte”. For the most part, chamotte is charcoal or wood or some other substance mixed into the clay to make it stretch. Not physically, as in elasticity, but monetarily, as in Tofukuji lived in abject poverty. In addition to chunks of things that would’ve burned away in the firing, Tofukuji used Ground Antique Chinese Pots as a kind of chamotte, to cut the expensive clay. Likely shards and fragments of broken pots, rather than whole pots, but still a fascinating tidbit of information. So, don’t fret about the price tag on that Tofukuji, because you’re getting not only a Tofukuji, but an antique Chinese pot to boot!
Now, on to the Pots! 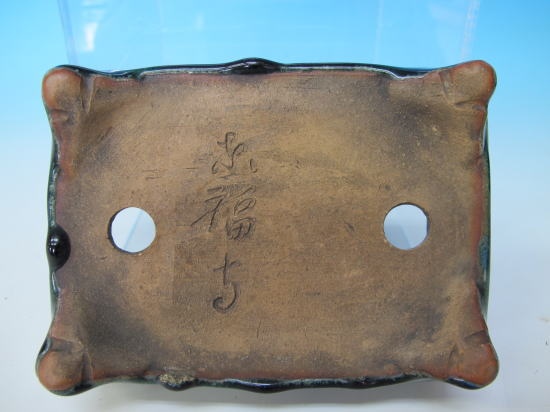 A rich green glazed Tofukuji with silver oil droplets, the glaze that made him famous. The crackle glaze is thick and the drips showing at the base are awesome!
Note the signature: these days, it’s been reported that forgeries have been spotted with signatures created using machine routers and pots that resemble Tofukuji’s work. The signature in these will be identical to the real thing, but for one detail: signatures carved into the clay before firing will have some waves around the lines, the result of clay displacement. Cut signatures won’t. Saavy? Good.

This is perhaps the most imitated and emulated glaze among contemporary potters, one can see examples from 3rd generation Shukuho, Ikkou, and Koyo; though none quite hit the mark(though Ino Shukuho comes pretty close). The reason for this is a simple one: Tofukuji burned the significant majority of pots with these type of kiln changed glazes in Noborigama, or a wood fired climbing kiln. Wood fired kilns of this variety are no longer legal in Japan, due to environmental regulations, so, while many potters emulate Tofukuji glazes with gas and electric kilns, they never come close to the complexity produced in the Noborigama.

Two views of another interesting Yohen rectangle. The running rivulets of glaze are quite beautiful, and the silver crystalline surface accents really lovely. Masterpiece.

A deeper blue rectangle, with a very thick glaze that is deep and shallow at various parts. A Complex and unique glaze.

Two views of a multiple glaze shallow oval. This style of glaze is a Tofukuji original, and can frequently be seen in the work of Echizen Bunzan and Fukuda Shigeru. 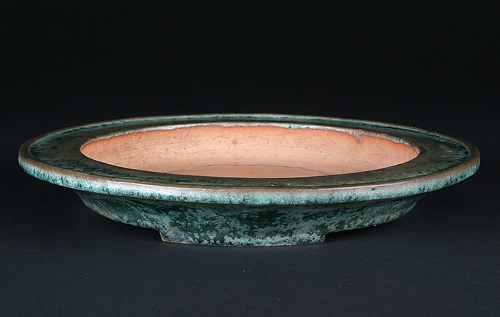 A larger cut footed round with lip, glazed in a darker oribe-blue with fine oil droplets and silver surface crystals. A very beautiful and functional pot, I’ve seen this one, or similar, used in several Kokufu Ten exhibitions.

A similar shape and size as above, this one with a much more muted glaze, pitted and more rustic.

A more fantastically glazed round pot. The swirling colors and expert application are very nice. It bears mention that, other than some of the most famous antique Canton ware glazes, pots with multiple color glazes like this weren’t often seen when Tofukuji made these pots. While today we see pots with some really spectacular and unique glazes, in Tofukuji’s time this was revolutionary.

A hand formed cream glaze cascade with Tofukuji’s signature style of cloud feet. These days, one can see this type of feet on pots from many potters, all homages to Tofukuji’s style.

A very rare style and glaze from Tofukuji, this one with 4 of his signature style cloud feet on a round pot. Much more refined and sharp than common Tofukujis.

A simple cream glazed crackle rectangle with cut corners and feet. The patina in this piece is lovely.

This photo comes to us from Peter Warren, from this years Kokufu Ten. I believe it’s from Koju En’s sales table. A pair of glazed Tofukuji lipped ovals, with cut style stepped feet, in blue and cream. All I can say is “droooool”.

These next images come from Ayumu Fukano, master at shohin specialist nursery Yorozuen. I’m sure we all know who they are 😉 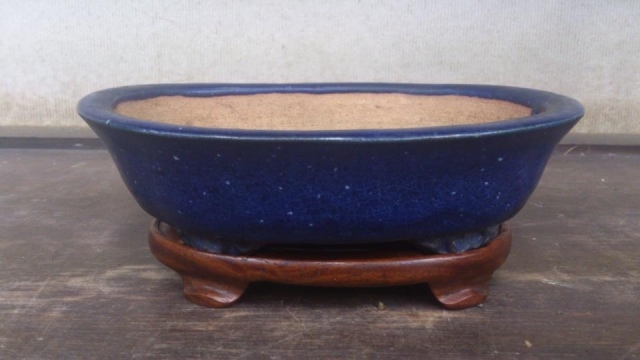 A really awesome combo: signature style and shape Tofukuji blue, with a stand made and signed by Tofukuji himself. This has got to be a one of a kind!

A multi color glazed tall round with Tofukuji cloud feet. See above for an idea of how revolutionary this type of glaze was. Many potters have emulated this style, Bushuan and Bunzan kilns notably so; while Bunzan falls a bit short of the originals, Bushuan much less so!

A cream Glazed rectangle with a large swath of blue glaze….

My logo tree, a Miyasama Kaede in a Bushuan pot. It’s well documented that Fukuda Shigeru is a fan of Tofukuji, but it’s nice to see an homage and an original together side by side for comparison.

A very rare style and glaze from Tofukuji. Cascade riveted drum with double bands, lip with hemp rope detail, and Tofukuji cloud feet. I’ve seen but two of these, the other a green in “3”.

This is something different and unique! The larger cavity has drainage, the smaller a pool for water…the first land/water penjing! While there are a few around, the crab detail(which, from studying others as well as Jr in my collection, I believe were press molded) is rare as well. 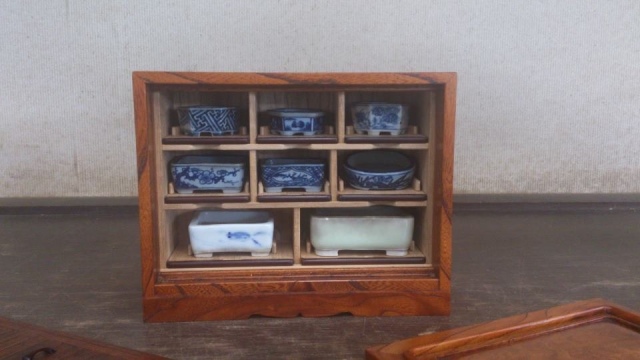 Now that, boys and girls, is a set!
Painted Tofukuji are rare, and It’s believed that someone else painted Tofukuji pots that are painted(and I believe there are at least 2 different painters from the styles I’ve seen) no one is sure who really painted them. I’m not sure why the experts believe Tofukuji didn’t paint them, perhaps Mr. Warren will chime in in the comments. 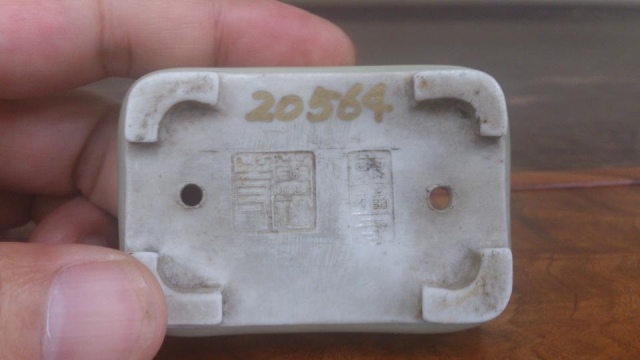 Here is the bottom of one of the pieces in the set. These are the common Hanko on painted Tofukuji, and from the number on the top we can see that this set is formerly of the Takagi Collection.

This is another unique piece, with a lovely glaze. This shell shaped pot has a small loop for hanging, for cascading style bonsai or accents. Even today, this would be considered Avant Garde. 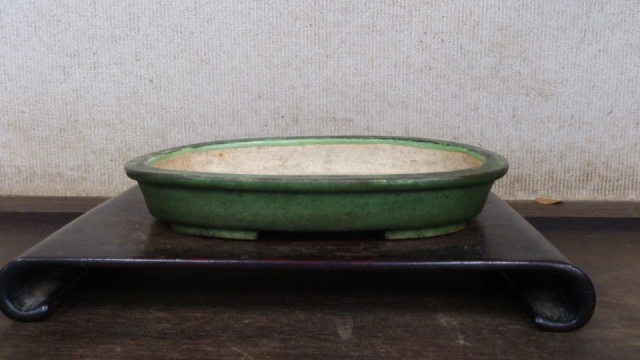 A really nicely glazed green Tofukuji oval with cut feet. This is probably the second most common style of shohin Tofukuji, the most common being tiny Terebineri rounds. The patina on this piece is lovely.

A cut footed rectangle with thick green glaze that has blue highlights. On the exterior of the pot, the blue has disappeared and become a deeper green, masked by patina; if you look closely, you can still see the original blue highlights on the interior rim where patina doesn’t build(counter intuitively).

A very thickly glazed Tofukuji rectangle with cut feet, in an oribe with fine oil droplets, silver crystals, and somehow, notes of gold! A prime example of why Tofukuji is considered the pinnacle of bonsai pottery in Japan. 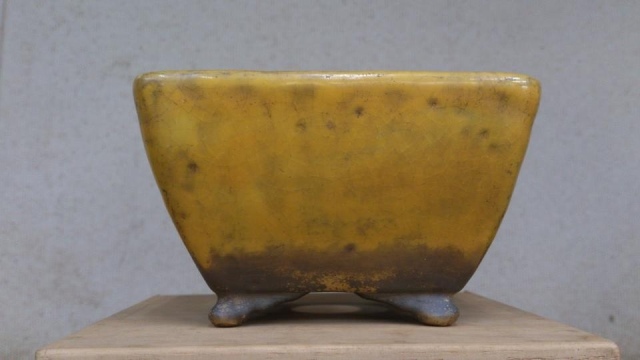 And we’ll finish up today’s look at Tofukuji glazed pots with a very rarely seen yellow semi cascade square, showing a wonderful patina. I’ve seen exactly one yellow Tofukuji, outside of books. The rarest of the rare!

Thanks for taking a look at some more Glazed pots from master potter Heian Tofukuji! I hope you’ve enjoyed them!