A while back, we looked at several pots from the master of surreal and interesting carved miniature pots, Okatani Zeshin. I received a lot of feedback and mail on those posts, so I’ve been putting together a few more pots for a while now.
A founding member of the Yokohama guild(an organization of potters making shohin and mini bonsai pots), Zeshin has influenced a generation of potters who specialize in carved pots. While his carving is extraordinary and unique, his glazing skill and recipes are every bit as fascinating, showing incredible depth, color, and control. It’s a real shame that he didn’t make any uncarved and easily usable pots with these glazes.
These links will take you for a look back at the previous posts for a refresher:
Pots by Okatani Zeshin Part 1
Pots by Okatani Zeshin Part 2

Now, on to the weird-ass pots! 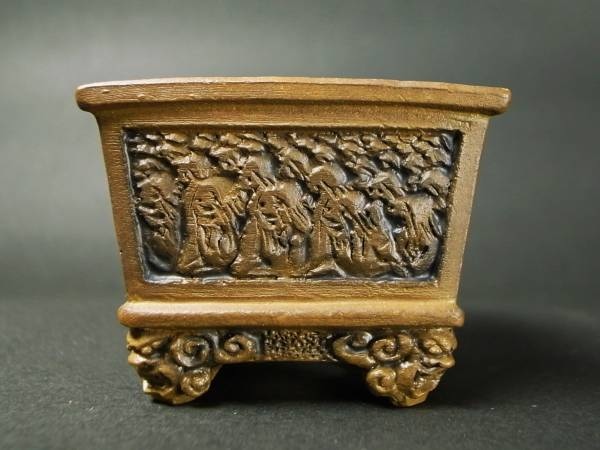 We’ll start off with this demon footed, lipped, unglazed sand colored clay square with repeating monks window relief carving, underside crabs, and multiple marks. Now that, is a mouthful of a pot description! The window relief carving I refer to as “repeating monks” was made famous by Chazan, and then taken to the extreme by Zeshin; in Japanese it’s called “百人”, which loosely translates to “hundreds of people” carving.

A view from the corner bottom…the base is as intricately carved as the sides, with another Zeshin staple carving, angular crabs. Between the demon feet, the repeating monks, and the crabs, this pot is the most representative sample of Zeshin art that I have seen. 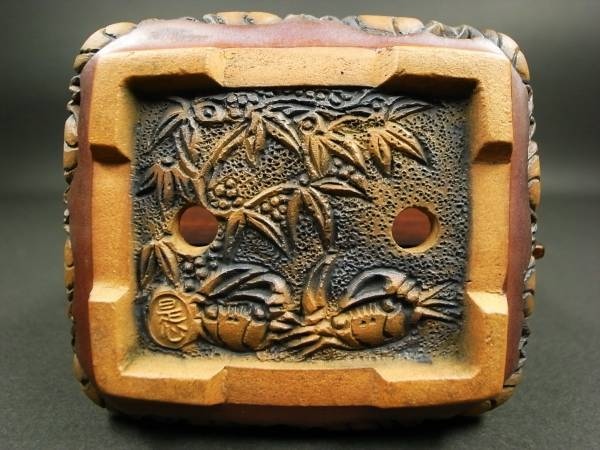 While the previous piece is certainly a tough act to follow, this piece is very nice. A rounded rectangle with angular base and multiple exterior wall crab carvings and underside carvings of crabs in a coastal landscape. Here we can see a little of Zeshins skill with glaze and finishes, in addition to carving: the slight notes of darker tint to the clay are interesting and create a cool suggestion of shadow and light. What I think is fascinating about this use of glaze is that appears to be of the same type often applied to pots as artificial patina, like manganese, but used here in a much more appropriate manner!

A really nicely carved crab round with Zeshin’s signature red and black glazes and a really unique little thimble for water.

Two views of an eggshell or maybe clam shaped pot with multiple glazes and crab carvings. A really well made piece, the red glaze to the base is really set off by the yellow-shot-through-with-black glaze on the top of the pot. I know I can’t be the only one who sees these pieces and immediately calls to mind H.R. Giger’s fantastic and alien airbrush paintings. 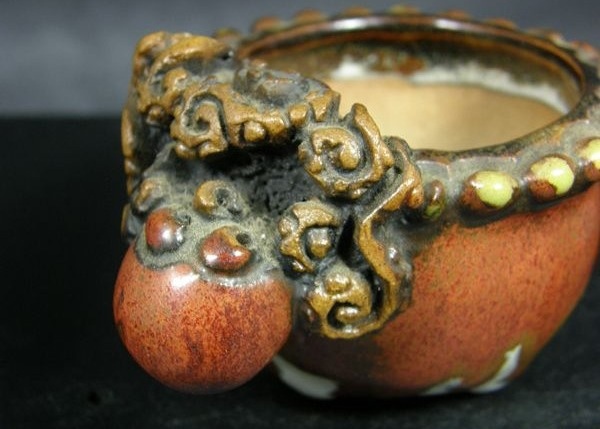 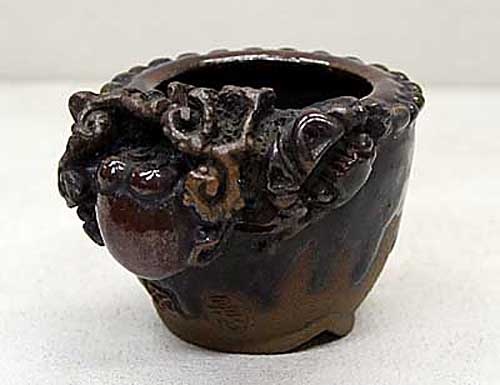 A trio of different rounds with octopi hanging off the sides, in 3 different Zeshin styles: angular and expressionistic, realistic, and cartoonish. The black and red over white glazes are go-tos in Zeshin art, and really create totally different feels for the pots.

A pair of repeating monks or “hundred people” carved pots. The multiple glazed square with demon feet is especially interesting, with it’s bands of glaze and relief.

A shallow tray style glazed rectangle with crab figure carvings inside the pot, formerly of my collection. From the top you get a good idea of the size, one of the larger pieces in Zeshin’s portfolio. This would look awesome planted with some tall growing marsh grass or reeds, I think!

A crab carved taller round with a very nice Namako type glaze. The way the glaze drips and runs around the crab is masterfully done, and the Namako itself really well made. 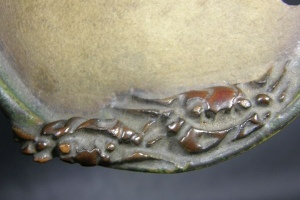 A glazed oval with a small crab carving detail, nearly invisible from the front. A more easily usable Zeshin, I think. 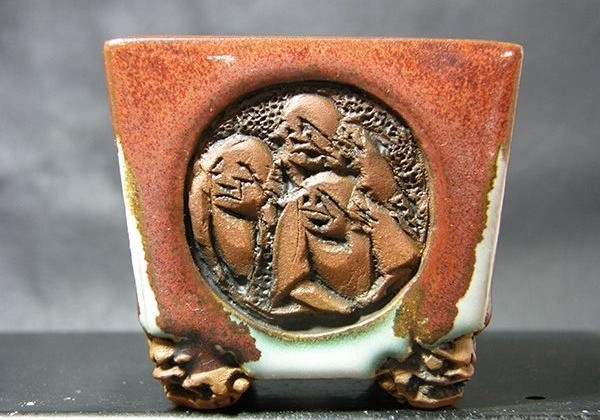 Three views of a round window relief carved square with demon feet in Zeshin red over white. The window motifs shown are Zeshin staples: dragons, “hundred people”, and dragonflies(not pictured). 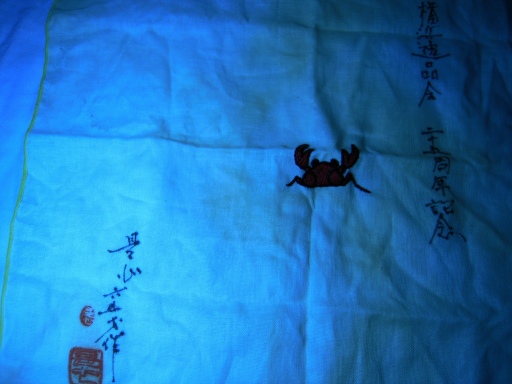 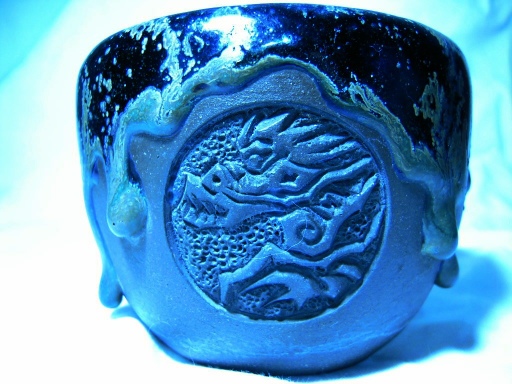 Signed cloth and round window relief round pot with a really thick drippy black shot through with white glaze. The bluish lighting in this photo sucks, but it’s worth a look anyway for the really well executed thick dripping glaze.

Two views of a more rare Zeshin motif: nudes. I’ve seen a few of these, but they’re not a common Zeshin subject. I find his nude figure carving a bit cubist and abstract.

No look at Zeshin is complete without a figure pot! Zeshin animal pots include owls(look back at previous posts!), elephants, crabs, complete unknown fantasy animals and simple frogs, like this black glazed piece.

A pot that clearly shows the influence of the carver that came before: an obvious homage to the great nail carver and Tosui/Harumatsu cohort, Shinano Chazan.

A pair of early work Zeshin, the first previously of my collect. This type of clay and comparatively rough carving work is from Zeshin’s younger years, a totally different style and feel from his later work.

A taller lipped round cascade with demon feet. The glaze covers some deeply inset relief carving, a really nice effect.

The most often seen Zeshin stamps. Many Zeshin will have nail carved signatures in addition to these marks, and many pots will have more than one stamp.

And we’ll finish up today’s look at Okatani Zeshin with these two sides of crab-carved-corner square cascade with demon feet and inset panels. The two sides show the crab carved into the corner as well as the different glazes on each side. 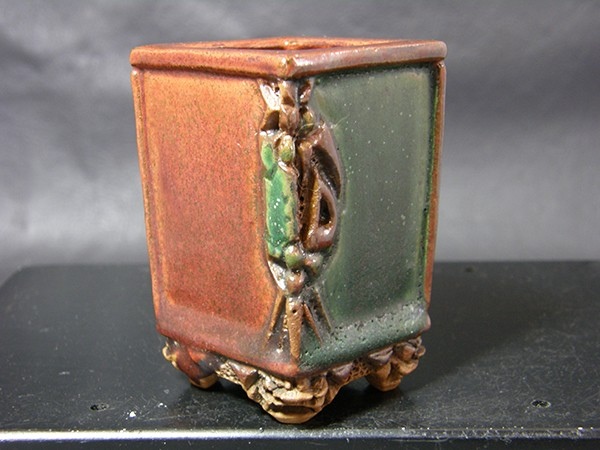 From the corner, it’s easy to see the two different glazes and the crab and demon head on. Really interesting contrast and compliment.

I hope you’ve enjoyed this look at the surreal and odd carved pottery of Okatani Zeshin. Thanks for reading!

I've been collecting Japanese Bonsai pots for a few years, and feel that the famous, and some of the lesser known but great Japanese pot artists could do with a little more writing and exposure in English. Additionally, this blog will feature My own And others bonsai for discussion. The purpose of this blog is to further knowledge of Japanese pottery and Japanese style bonsai. If you have any questions about Japanese bonsai pottery, or would like to acquire pots by some of the potters presented in the blog, feel free to email me at gastrognome@aol.com
View all posts by japanesepots →
This entry was posted in Famous and Antique Potters. Bookmark the permalink.