A Quick Shot of a Kifu Shimpaku(Update, Mystery Solved!)

A while ago I posted this post about a Kifu Size Shimpaku Juniper from my collection. I’d wondered about the pot for quite a while, as it was not marked as a Tofukuji Jr, and the quality was different and much more like a Tofukuji Senior. For the last several months, I’ve been 100% certain that’s it Junior(unfortunate, but still one of the best he ever made). Here’s the original post, and some succinct and brief proof:
“After putting up a new bench in the garden today, I decided to grab this Shimpaku and take a couple of quick shots before some heavy pinching. The plan for the future is to reduce the total weight of the foliage by around 40%, as it’s a bit overwhelming for the trunk, despite the nice areas of Shari that will be slightly expanded. Height is 11”.
The pot is a big fat question mark. Its a first or second generation Tofukuji. The style, pear skin clay type, and stamp are all first generation(though Jr often didn’t mark his pots as “Jrs”), though the Chop is one Tofukuji Sr mostly reserved for slightly larger pots. A master in Japan told me that if it is a First generation, it is exceedingly rare and valuable(and not chump change if its a Jr!) For now, I’ll just leave it as a “Tofukuji”. 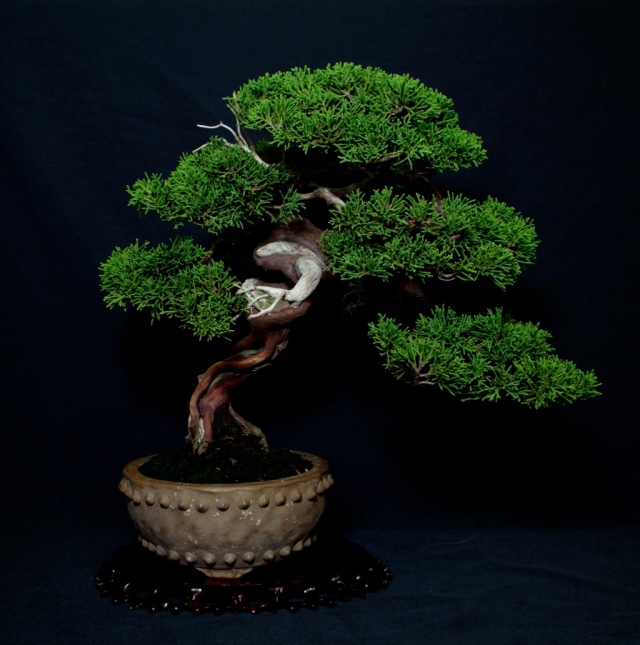 And here are some more images of the pot.

The style is very much Tofukuji Senior. The foot design, fabric impression, rivet style, pear skin on interior, and clay remnants around the drainage are all key indications of Senior style. 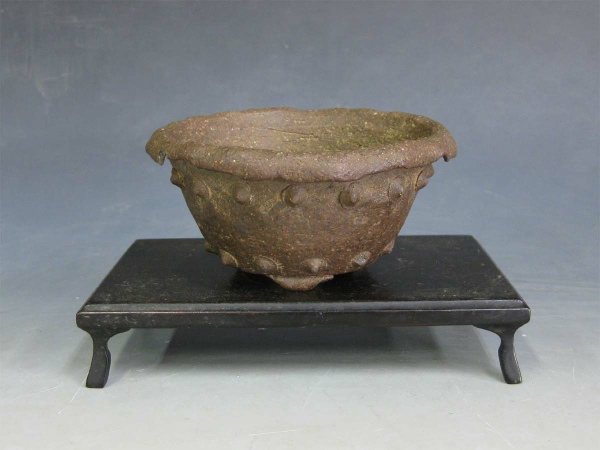 A First Generation Tofukuji showing similar rivets.
The only thing that gave me(an a couple of other well-known Japanese experts!) pause was the single tie down hole. Senior didnt use tie-downs. I believe however, that this was drilled after firing, so that doesn’t prove it one way or another either!

Close up of the small drilled tie down.
But, here’s the clincher: note these two small impressions on the underside of the feet:

Subsequent to this original post, I’ve ascertained that this feature is unique to Tofukuji Jrs. Consequently, I believe the tie down hole was most likely drilled to remove a 2nd generation Tofukuji mark, so that the pot could be sold as a First Generation(I bought it as “probably a Junior” and it was inexpensive).

A couple of marked 2nd Generation Tofukuji, showing the unique method of foot attachment with the two oval impressions.
Unfortunately, the removal of 2nd generation specific chops isn’t all that uncommon. I have 2 other pieces where I believe this to be the case, clear examples of, if not outright forgery, total misrepresentation and shady business!

I've been collecting Japanese Bonsai pots for a few years, and feel that the famous, and some of the lesser known but great Japanese pot artists could do with a little more writing and exposure in English. Additionally, this blog will feature My own And others bonsai for discussion. The purpose of this blog is to further knowledge of Japanese pottery and Japanese style bonsai. If you have any questions about Japanese bonsai pottery, or would like to acquire pots by some of the potters presented in the blog, feel free to email me at gastrognome@aol.com
View all posts by japanesepots →
This entry was posted in Famous and Antique Potters, My Personal Collection. Bookmark the permalink.

2 Responses to A Quick Shot of a Kifu Shimpaku(Update, Mystery Solved!)