Posted on August 8, 2013 by japanesepots

Kaede Bonsai En
Before our flight out to Japan, I took advantage of the(extraordinarily rare for a Chef like me) time I forced off to spend a day at Kaede Bonsai-En, with the organizer of this little adventure, Matt Ouwinga. I’ve known Matt for a couple of years, but this was the first time we’ve met in person and the first time I’ve seen his wonderful garden. In addition to a whole load of Japanese and Trident Maples(Kaede Bonsai-En, duh), Matt has a very impressive collection of shohin and chuhin bonsai of various species: Shimpaku, Japanese Black and White Pine, Obai(winter jasmine), Chojubai, Stinky Maple, Ginko….et al. Et al. 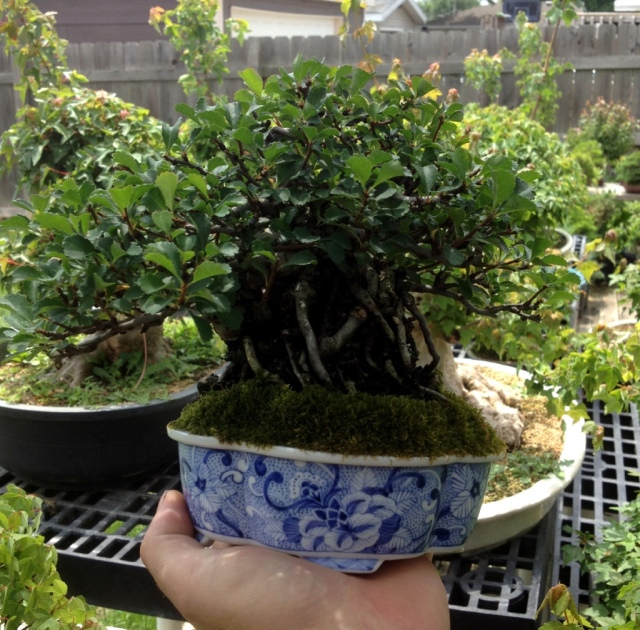 Chojubai in a Gekkou pot, a great match. This one was plopped into this pot for this years’ rounds of National Shows…alas. Hopefully Matt will display something nice at the Chicago show instead. The smart money’s on him if he does. 😉

Root over Rock Kaede, Ikkou wraparound pot. Great pot selection, great tree. Matt’s had this one for quite a while, and it was a really good bonsai before he got his hands on it. It’s only improved since. The baby blue signature Ikkou glaze really compliments light green Kaede foliage well, and, in my opinion, it’s the closest one can get from a contemporary potter to the antique Chinese, solid “Kinyo” glaze.
I’ll go into more detail about all the pots I saw after the trip log is laid down. Stay with me! Breathe! We’ll get there, clay knurds…

Chinese Quince, Aiba Koyo Yellow crackle glaze. Yellow is a classic color to showcase Chinese Quince. Why? Well, when you glue( or sometimes grow…) one of those big, ugly ass yellow fruits on there…it’s complimentary. That’s one silly reason. The more refined (IMO) reason is the LACK of the big, silly, unattractive, bright yellow fruit. The yellow is a good contrast with the exfoliating bark and mid green leaves, but more importantly, it suggests the fruit without it being present. It’s aesthetically pleasing from all angles, and artistically appealing as a choice…because…well…subtlety kicks ass. Ironic that…
as a sidenote, you can extend this principal to yellow flowering trees shown out of season: bonsai like Obai(Yellow flowering Winter Jasmine) or Ume(Apricot-many colors) can make a huge impact in a shohin display when shown out of season in pots that imply the flower or fruit…the subtle suggestion of the big seasonal show implied in the container selection, out of season.

Quick snapshot of a small part of Matt’s Garden: Kaede Bonsai-En. Matt’s been growing and refining bonsai for around 2 decades…and he’s a young man…well, a younger man than me, anyway 😉
I don’t remember where I read or heard it. Eideticker memory has its benefits, and it’s drawbacks. But a quote has stuck with me, ostensibly attributed to a Japanese Professional: “Some people do Bonsai for 30 years, Most people do bonsai for one year, 30 times.” Matt’s made the most of his 20, and his Garden shows it. I envy those who have studied with him: Namely, Neil Dellinger, who was also along for this adventure in Japan, and has studied with Matt for the last 6 of his 7 years in Bonsai. Check out some of his trees in your recent “Nationals” album, or check out his website at
Broken Arrow Bonsai
As a professional educator, Matt is justifiably proud of the work his Bonsai students have achieved, and made sure to include Neil in this years article in Bonsai Sekai concerning his Kokufu entry in February.

In addition to impressive Bonsai, Matt boasts one of the most extensive Bonsai Pottery Collections in the West, including the most extensive collection of Heian Tofukuji Pots in America. I thoroughly enjoyed studying his collection in person. For a limited selection of some highlights from Matt’s Collection(and better photos than I boast!), visit his website at Kaede Bonsai-En 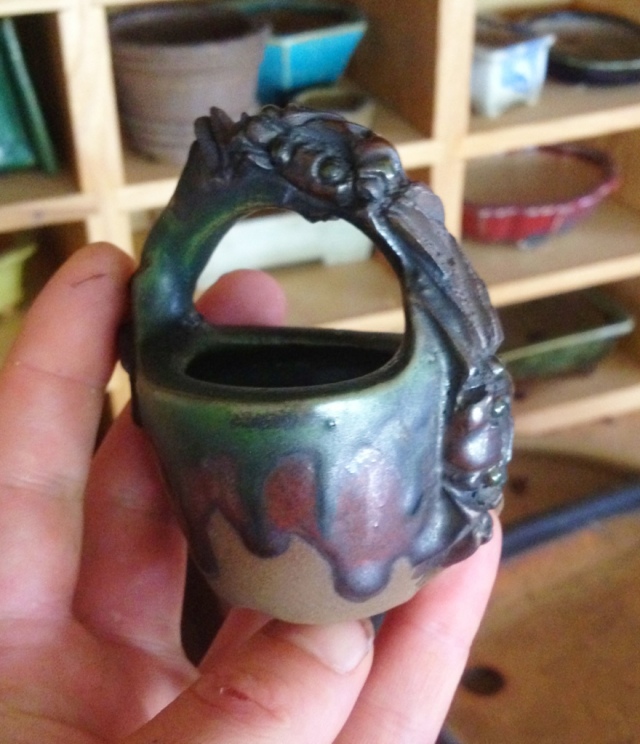 Shofuen
After a brief late night tour of Shunkaen upon arrival in Japan, the next morning saw us up bright and early to visit Komiya San at Shofuen. There was an impressive array of mostly Shohin Bonsai, and a good selection of pots at reasonable prices. Komiya San was fun and very enthusiastic about Bonsai, it was a great visit. 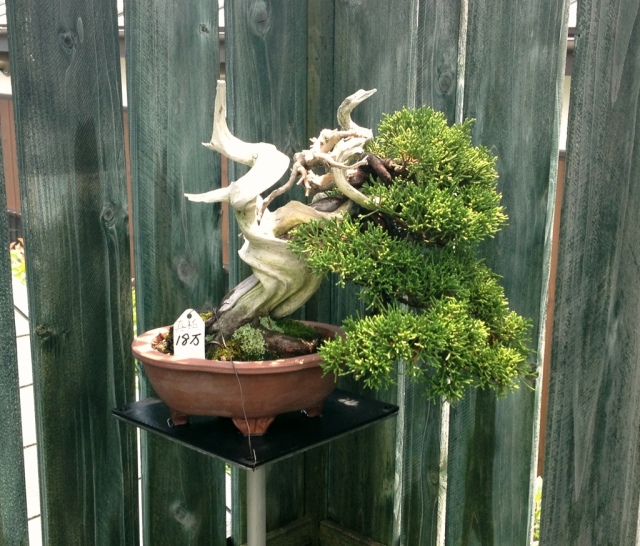 A couple of nice Shohin Shimpaku. The Shari on the second one gives me some serious wood…while puns are the official lowest form of humorous discourse, I reserve the right to use them often and unashamedly. Deal.

Kuromatsu. Black Pines! My favorite! I find it interesting to note the “excessive” needle length on the(recently, like, last week, recently) decandled “smaller shohin”(smaller shohin-10-15cm, or, 4-6”) black pine. Probably not decandled last year, and, judging by the condition of the soil and pot, it was probably downsized-to-weakness. Skipping a year in refinement when major root work like that is done is, IMO, a pivotal step that most western enthusiasts miss, weakening the tree and, in the long run, setting the refinement back a bit(because when the weakness catches up and compounds, you’ll perhaps have to give the tree several seasons of free reign to regain strength, as opposed to the 1 when you should have laid down the tools)….

From the top, left to right, and dropping
Down: The First of Many “Sea of _____” photographs. Here, we have a sea of mostly ‘Maples’: Stinky Maple, Komachi Rose(big fat badass Komachi Rose ;-)), Kaede, Kaede, Kaede, Kaede…
There was a lot more to be seen at Shofuen, Bonsai wise, and I wish I’d snapped a few more pics. I think l spent more time enjoying Komiya San’s company than the awesome shohin in his garden.
Yamatoen
Our next stop saw us at Yamatoen, garden of Yukio Hirose, Chairman of the All Japan Shohin Bonsai Association. Yamatoen has a wonderful selection of Shohin bonsai and masterpiece level pots! It was a real pleasure pawing through everything. 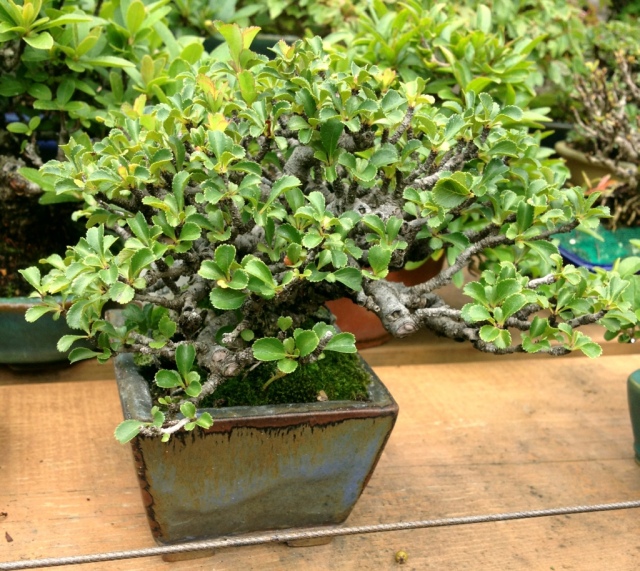 A nice little Chojubai in a first Generation Tofukuji pot.

Crepe Myrtle with a killer base. 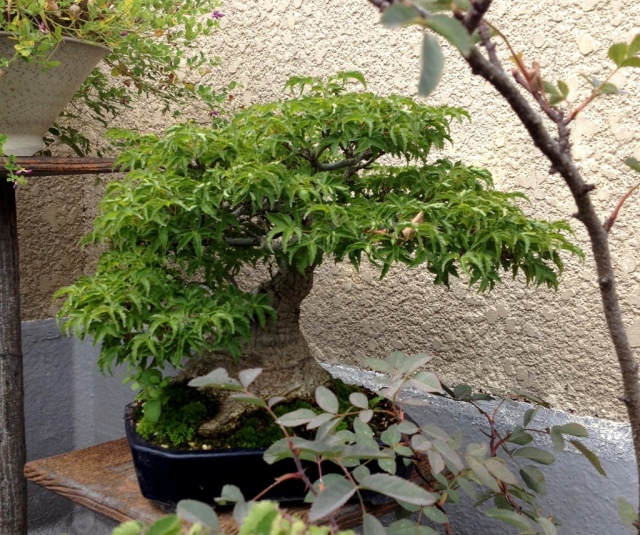 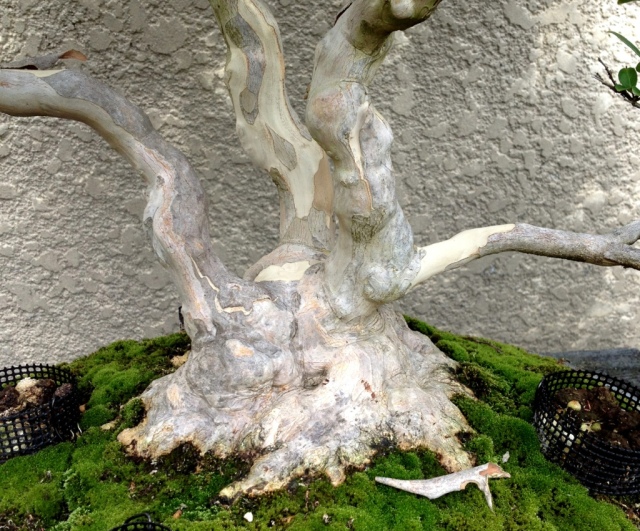 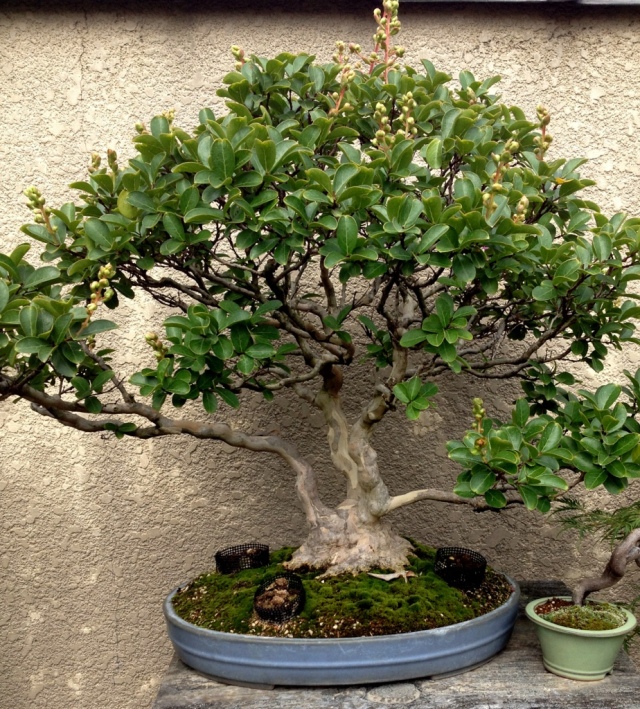 Princess Persommon in a Koyo pot 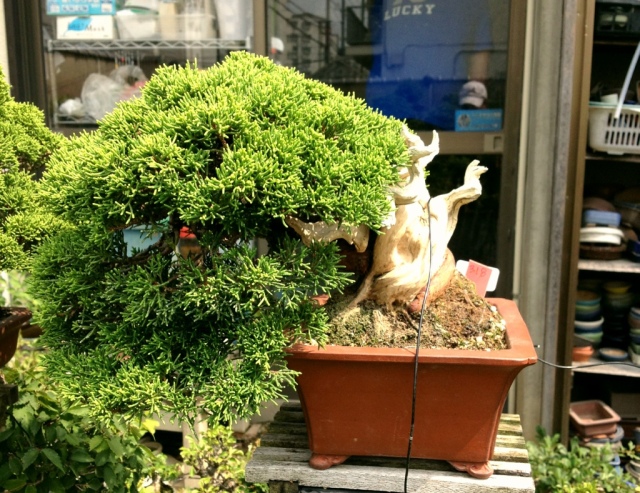 Saling the seas of Shinpaku…

The rest of the adventurers along(Top to bottom, Left to right), Matt Ouwinga, Jim Baley, and Neil Dellinger. 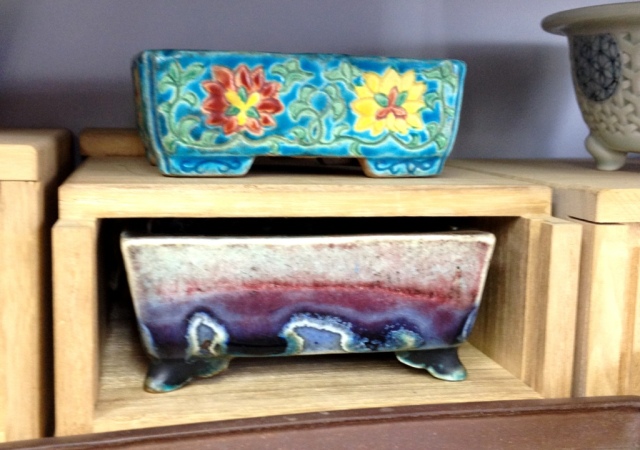 A couple of pretty decent Tofukuji…

That’s the beginning of the trip. Stay tuned for more, coming as soon as I organize my thoughts…and pictures…

I've been collecting Japanese Bonsai pots for a few years, and feel that the famous, and some of the lesser known but great Japanese pot artists could do with a little more writing and exposure in English. Additionally, this blog will feature My own And others bonsai for discussion. The purpose of this blog is to further knowledge of Japanese pottery and Japanese style bonsai. If you have any questions about Japanese bonsai pottery, or would like to acquire pots by some of the potters presented in the blog, feel free to email me at gastrognome@aol.com
View all posts by japanesepots →
This entry was posted in Trees. Bookmark the permalink.