Takemoto Hayata was born Takemoto Marks Masanori In the first year of the Kaei period, 1848. The son of Takemoto Yotoki, a Shogunate Bannerman, he was born into the Samurai class of nobles in the feudal Shogunate system in Tokyo. As his father was powerful and he himself was a samurai, they lost everything in the Meiji Restoration. In 1867, upon the restoration of the Emperor to the throne, the Shogunate ended. Over the course of several years, Samurai and Daimyo had their rank, property, income, and elite status revoked by the Emperor.
Many Samurai chose to side with the Emperor, and in Takemoto’s area of Tokyo, these became the Tokyo police. Many others did not go quietly, and revolted. The revolts were quickly squashed by the new Imperial Army, headed by a core of Samurai that were the Tokyo Police. Takemoto refused to fight on either side, and thus, having no income, property, or trade, spent the rest of his years living in poverty.

Takemoto and his father were already pottery hobbyists when the Meiji restoration occurred, having made the acquaintance of Inoue Ryusai, a Seto Potter who visited the Edo suburbs. After the Restoration, Takemoto began producing pots professionally and in earnest, having built a kiln with his father from old bathroom brick and tile in the Takatamura suburb of Tokyo very early in the Meiji period, dubbed Takemoto Hayata.
After repeated failures and much consultation with Ryusai(who eventually became the foreman at his kiln when he adopted western Slip casting methods), Takemoto began producing excellent small works, loved by the Imperials and their retainers. Eventually he also produced vases and tea ceremony items, but is still most famous for his bonsai pottery. Most of his work is in the Cochin-China style, but several other glazes, clays, and techniques were employed before his early death in 1892, only 44 years old.

Count Matsudaira and his wife at Kokufu 1

It is more than significant to point out that Takemoto is considered by many to be one of the principles responsible in the creation of Shohin Bonsai, albeit indirectly. Count Yorinaga Matsudaira is considered the most important person in the popularization of Shohin bonsai in Japan, and his love of Takemoto’s containers is well known and documented. One of the reasons Count Matsudaira was able to fulfil his goals in creating tiny Mame bonsai was surely the new availability of tiny containers made by Takemoto, many of which were commissioned by the count. But Count Matsudaira is a whole post in his own right….so….on to the pots!

A pair of rectangles, crackle and cream glazed, both in the Cochin style, from the Matsudaira collection.

A really awesome crackle Cochin style mokko from the Matsudaira collection. The patina is incredible. One thing that is wonderful about pots like these is that their lineage and ownership is well established(for the most part) and if one is diligent, can find out where every single bit of that patina came from over the last 130 years.

A very impressive(and needless to say expensive!!!) collection of Takemoto pots. This really shows the diversity of form and glaze that Takemoto used. Takemoto is most famous for his Cochin style crackles, but reds, blues, and completely unique odd one offs are also well known and impressive.
Speaking of…
Cochin Style Crackles 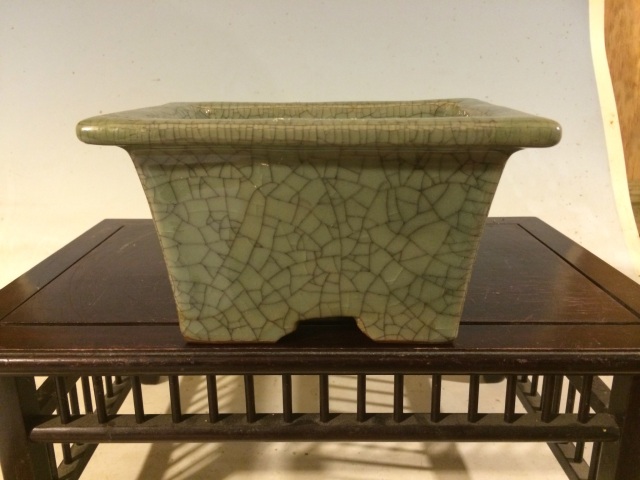 First up, a really sweet rectangle from the collection of friend of the blog
Matt Ouwinga. An excellent example of Takemoto Craze. 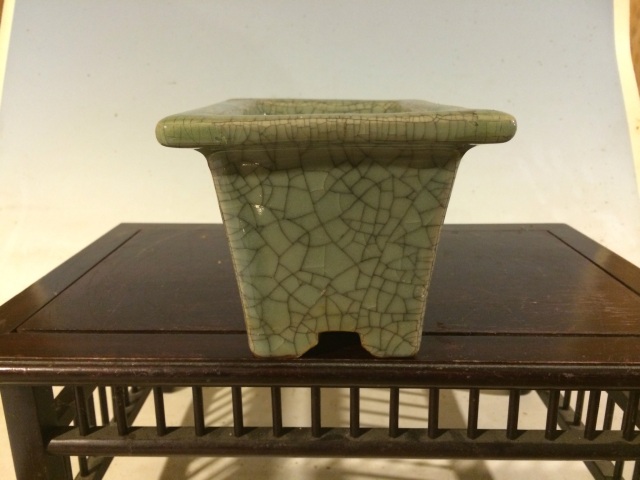 From the side, one can see the proportions that seem so odd to us today, the same proportions one normally sees on the Chinese pots of the period.

A fairly famous pot, here it makes an appearance in a very old and rare book about Bonsai pottery published in the 40s or 50s.

Another very famous crackle, this time in blue. The very light and non uniform crackle makes this a prize, and very unique.

What’s that you say? You’ve never heard of Takemoto? Well, you’ve got no excuse. While not exactly extensive, there have been several articles referencing Takemoto in English. William Valavanis’s 50 Year book(which is wonderful btw) has a great article on the history of Shohin Bonsai that makes mention of Takemoto. There’s the photo above, taken from Bonsai Today, issue 85.
And as I’ve said before, John Romano’s article on the history of Shohin Bonsai in International Bonsai issue 3, 2011 is excellent, and gives proper place to the importance of Takemoto in Shohin Bonsai history.

A really nice tiny crazed piece with an unbelievable patina! 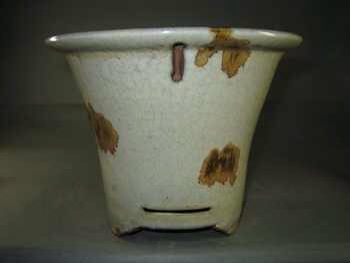 Crackle glazes are sweet, but it’s pieces like this one, and the next one that are stand apart excellent. I mean, you can get antique Chinese crackles for less than similar sized Takemoto, but not with touches like these. Small unique touches of unrepeatable wabi sabi.

A very famous and unique pot, named “Zan-setsu”-“Remaining Snow.” Crackle glaze sparingly used on a dark clay body. If you look in the standard art history and ceramics books, they pigeonhole Takamoto, because in their prejudice they give weight to the vases and tea stuff, and discount the Bonsai Containers, in most cases calling them flower pots or basins. “Takemoto confined his efforts in producing monochromatic porcelain and in this he attained marked progress”….really? This piece is neither monochromatic nor porcelain and one of the greatest works of the period! Pfft.

A very famous pair of Shohin Bonsai Cultural Treasures made by Takamoto. In the book Miyabi, the commentary on these pots is “This pair of Hexagonal pots made by Takemoto is valuable. Although Takemoto made many similar shaped pots, most were smaller than these pots. The beautiful glaze is a speciality of Takemoto.”
Unique Glazes

Five very small pots displayed together at Gafu Ten for recognition as Cultural Masterpieces. This type of glaze is also one of Takemoto’s specialities, and comes in many colors.

Two red glazed pots in the same glaze style as the above. The white peaking at the corners softens the pots which are otherwise angular.

A very rare and large vase by Takemoto. The glaze is simply outstanding. 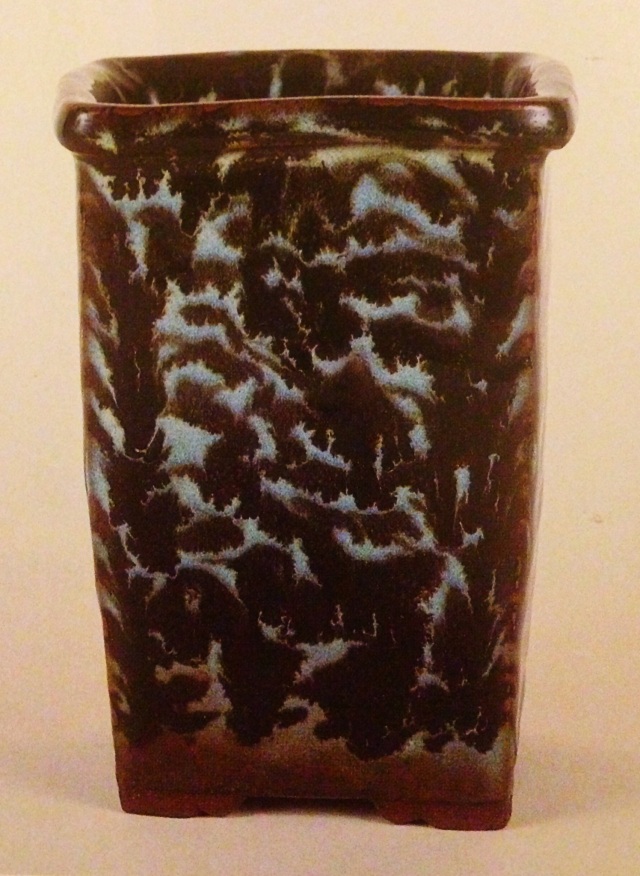 This pot is another Cultural Masterpiece. A really fantastic and unique glaze, like waves at night. 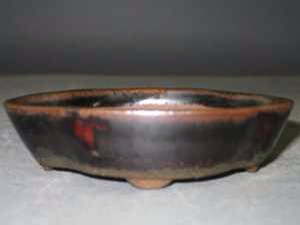 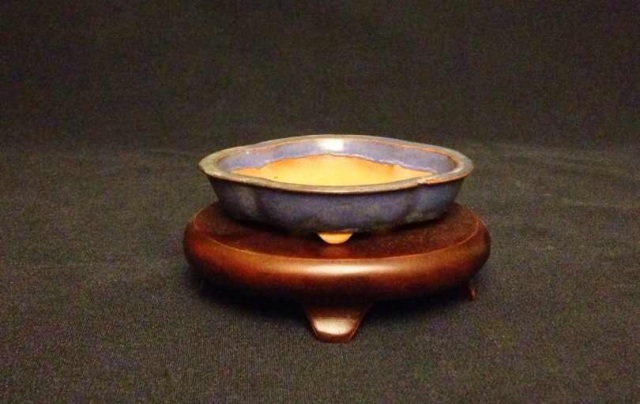 A small Ichiyo from my collection. 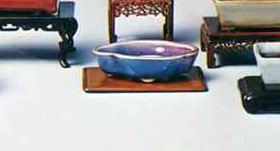 And a Takemoto. Note the foot shape a proportions, clearly the Ichiyo is an homage piece. 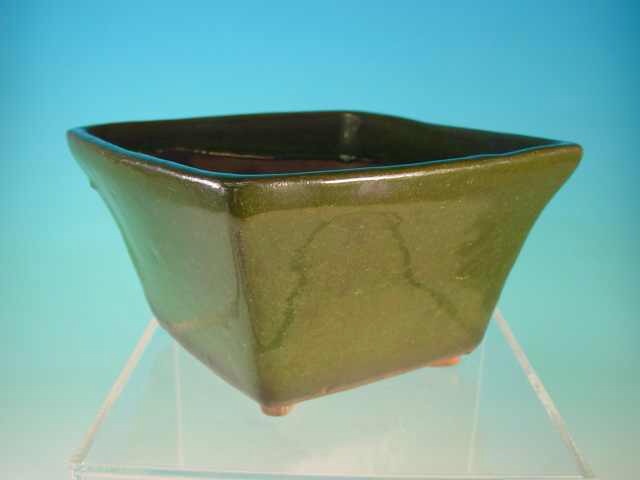 This green glaze is another of Takemoto’s signature glazes. It is soft and warm. 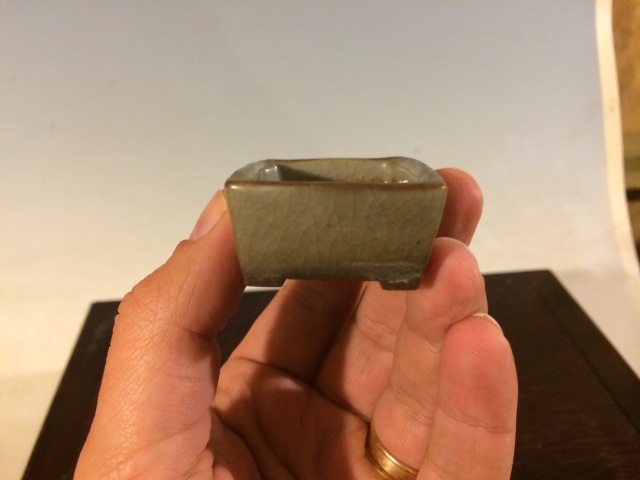 Three views of another Takemoto in this signature green glaze from the collection of Matt Ouwinga. Very representative of Takemoto’s work.
Other Pots 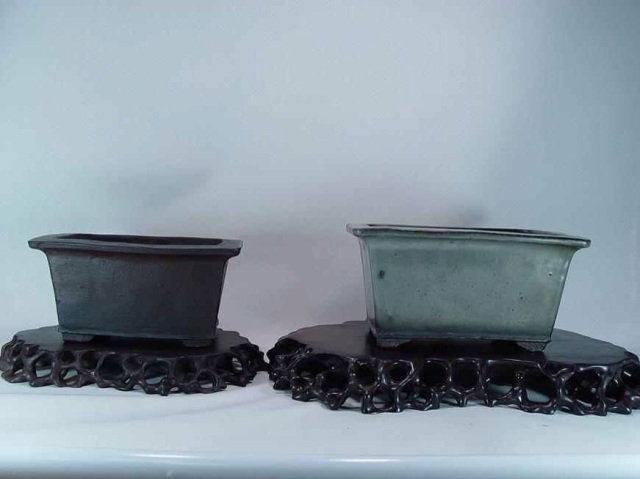 The previous unglazed piece paired with a similarly shaped Takemoto in a cream glazed Cochin style. The patina on the Cochin style is excellent, as is the display of the two pieces together.

A blue glazed rectangle with cut feet. In pieces like these one can see the influence Takemoto had on later potters like Tofukuji and Aiso. 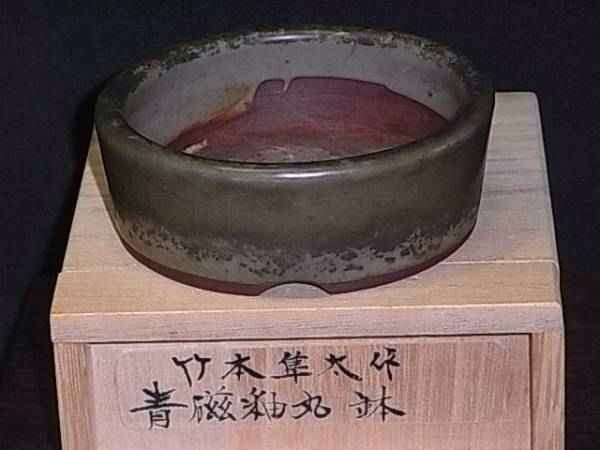 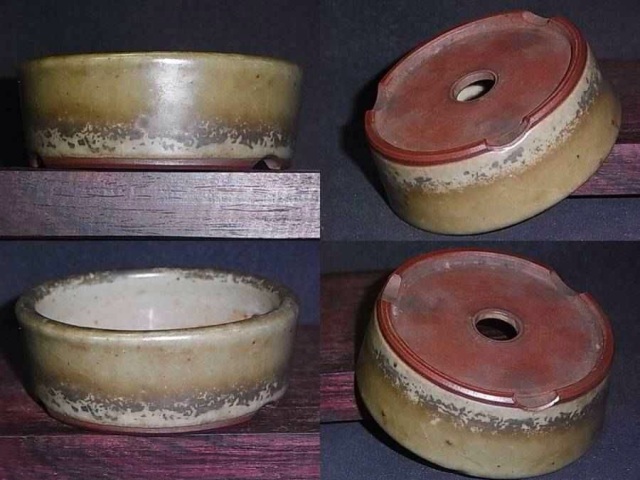 And we’ll finish up our look at the pots of Takemoto with this fantastically patinated Cochin style cream glazed round. A fantastic pot, and the equal or better of anything that came from China in the same period.
A few Shohin Bonsai in Takemoto Pots 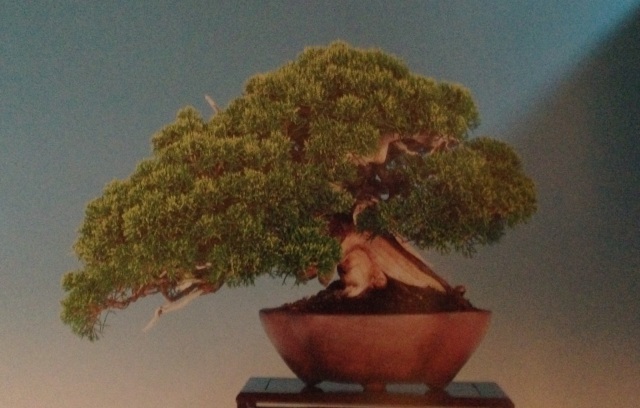 The Kinzu(Hong Kong Kuquat) in the second shelf, left, is in a Takemoto 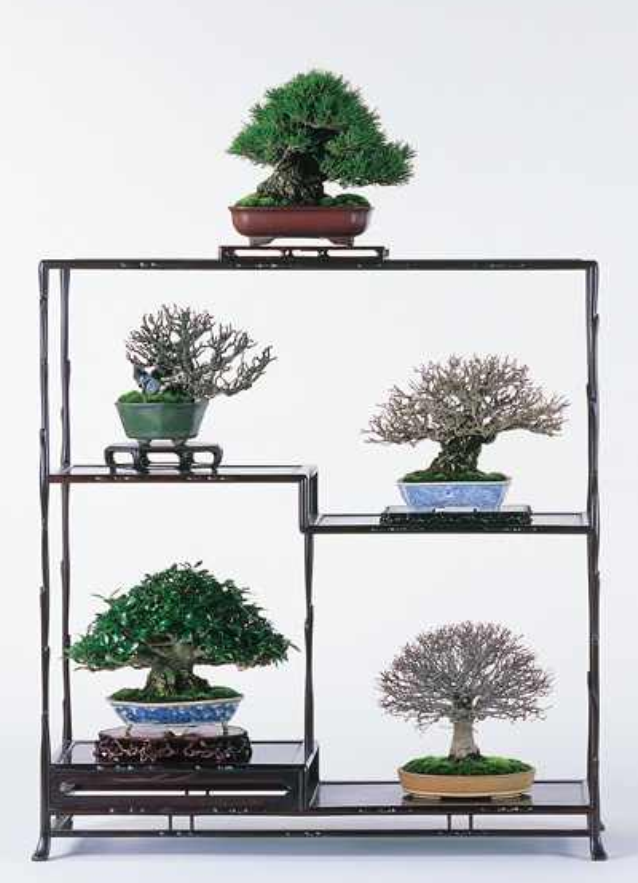 The Chojubai, second shelf, left, in a green Takemoto 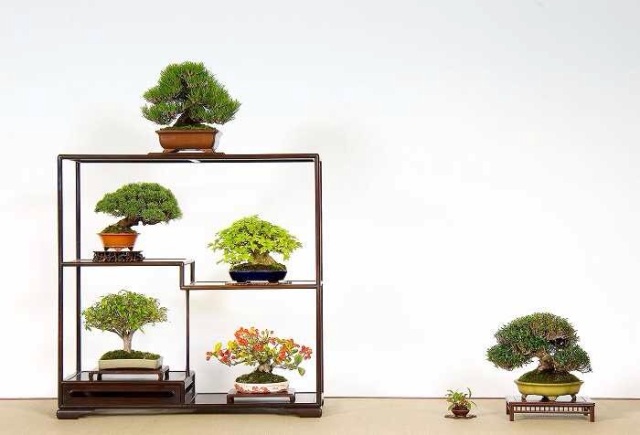 And that will do it for today’s look at Takemoto Hayata! Thanks for reading!

If you’re not already following the Facebook “Bonsai Auctions”, you should head on over.
Here are a few of the items I’ll be listing there this week. 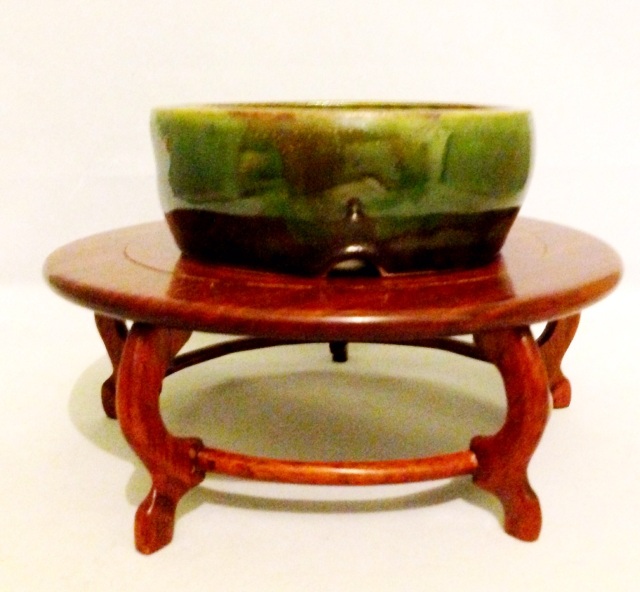 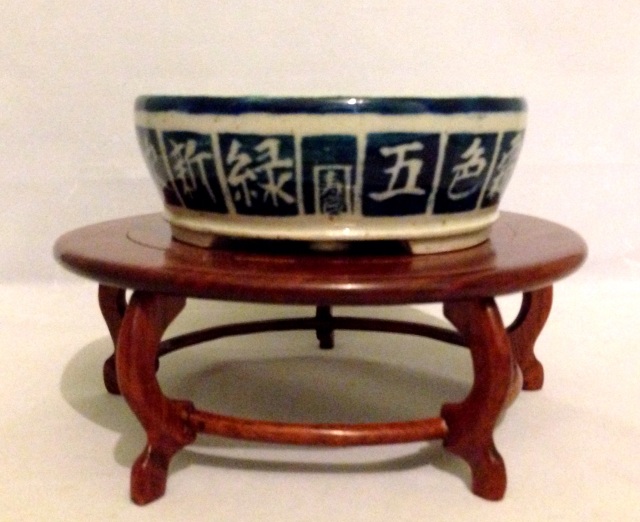 I've been collecting Japanese Bonsai pots for a few years, and feel that the famous, and some of the lesser known but great Japanese pot artists could do with a little more writing and exposure in English. Additionally, this blog will feature My own And others bonsai for discussion. The purpose of this blog is to further knowledge of Japanese pottery and Japanese style bonsai. If you have any questions about Japanese bonsai pottery, or would like to acquire pots by some of the potters presented in the blog, feel free to email me at gastrognome@aol.com
View all posts by japanesepots →
This entry was posted in Famous and Antique Potters, Trees. Bookmark the permalink.