Ono Gishin was born in Sukumo, a castle town, the eldest son of a Tosa clan samurai, Ono Fushikichi, in 1839, and passed away in 1905. As a fifth rank Noble, Gishin was the head of his Village in Tosa, But was a strong supporter of the Meiji restoration, and as such, later joined the Japanese Ministry of Industry and Engineering at the age of 31. The next year, in 1871, he joined the Ministry of Finance, and retired from civil service in 1874.
During his time he spearheaded numerous public works, including the building of Osaka harbor and improvements on The river Yodo.

In addition to his bureaucratic service, Gishin was a renowned businessman, industrialist, and entrepreneur, considered one of the founders of the Nippon Railway, the first privately held rail company in Japan, where he carried on some of the work started when he was a bureaucrat where the government had begun laying rail lines, and later led the company as president.
Gishin was also a courtier and chief advisor of Yataro Iwasaki, the founder of the Mitsubishi Zaibatsu, and it is said that Gishin laid much of the foundation for the Zaibatasu’s power, and that Iwasaki would not make any major decision without Gishin’s council, earning him the nickname 強一郎(Kyouichirou-The one Strength of. Ro[Ro here is a pun on the last Kanji of Yataro’s name]).(while not Bonsai related, I highly recommend checking out additional history on the Zaibatsu, Gishin, and The Iwasakis… as it is fascinating).

Gishin was very much what we would call a “literati”, and in addition to pottery, forged Swords, was accomplished at Go and Bonsai, and wrote Haiku. A true Bunjin in many pursuits.
His kiln was attached to his home, and he employed Owari potter Kato Shokichi to learn technique and glaze, and run the kiln. His work eventually outmatched Kato, most significantly in his fine glaze work.
Few works survive today of what was sold, those that do were mostly given as gifts to fellow literati, and were therefore cherished, and of them green and Adzuki Bean glaze are the most common, and best.
Now, on to the pots! 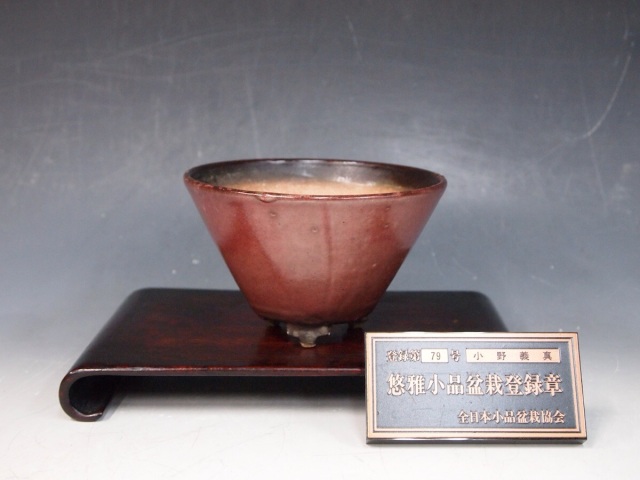 Photo Courtesy Yorozuen
A really fantastically shaped and delicate piece with the Adzuki Bean glaze Ono Gishin is famous for. This piece is available from Yorozuen. For a mere 1 million Yen it could be yours 😉
Adzuki, or Red Bean, Glaze is a type of copper based glaze that is not as pure and bright red as Peach bloom red. It often has specks of green where the glaze hasn’t fully reduced to red. This is one of the most outstanding examples of the glaze in existence.

A deeper and richer red than the previous piece, closer to Peach Bloom Red than Adzuki Bean.

A speckled green glazed piece with two belts. This glaze is unique and exceptional. 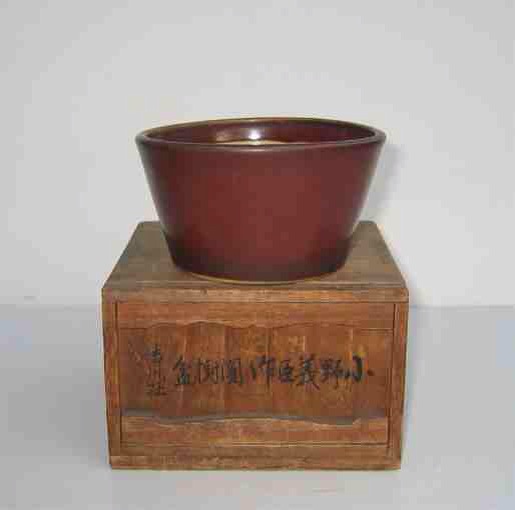 Another round piece in Adzuki Bean glaze with close ups. In the close ups you can see why Gishin is famous for this glaze, as his version has far less mottling than you see from others of the period. 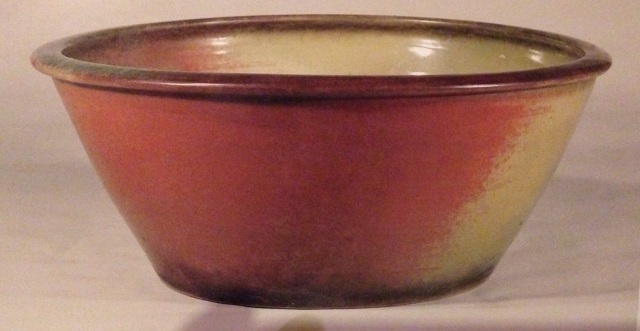 And we’ll finish up today with another piece available for sale, this one from Kinbon, also a steal at 1 million Yen! Excellent clean glaze with cool accents and feet.

This piece is accompanied by a box, which establishes the provenance of the piece. The box was made for the pot by a famous Yokohama collector of Gishin’s work in 1939. Boxes like this that establish provenance can be especially important in high value pieces where forgeries are common.

Hope you’ve enjoyed the article! Thanks for reading!