Aiba Kouichirou
Aiba Kouichirou was born in Showa 19(1944) the son of a potter whose family specialized in pots for plants and tableware, a kiln founded by his grandfather. In early 1970, Aiba Kouichirou built a new kiln, changed the name to Koyo Toen, and began making bonsai pots.
Aiba Koyo is most famous for glazed pots, but he also makes unglazed pieces and suiban, in addition to other wares. He is perhaps best known for his Oribe Yu glazes, and I’ve heard it said that his work with Oribe in the last decade rivals that of even Heian Tofukuji. In addition to Oribe green and blue, he makes some really nice starved Oribe in red and white, as well as crackle yellows, motif carved pots, and unique one off glazes. Pots are created using several different methods: Wheel, hand carved, slab, coil, and hand formed.
Aiba KuniakAiba Kuniaki was born in 1973, and recently took over the head of kiln, under the name Koyo Juko. Juko San has widened the production of the Koyo kiln into more diverse wares, and continues the tradition of excellence of his father.
Aiba Kouso
Kouso is Aiba Kouichiro’s Wife, and she makes smaller containers and Kusamono pots on the wheel, in Koyo’s famous glazes.

Pots from the Koyo kiln are very inexpensive for the quality, so they definitely fall under bang for the buck potters! An excellent Oribe from Koyo Toen can cost as little as 125$, while a similarly glazed Ino Shukuho can run several hundred, and a Tofukuji several thousand!

Now, on to the Pots!
Aiba Kouichirou 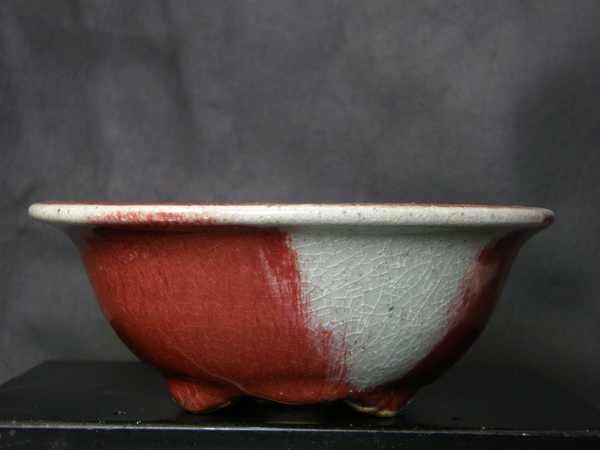 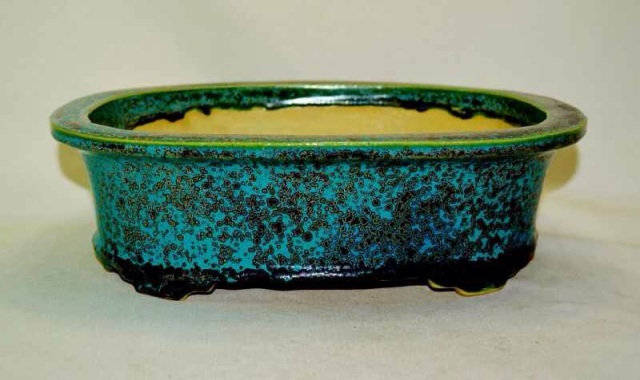 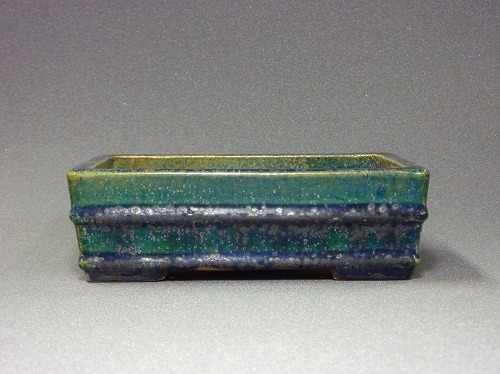 5 pots showing the diversity that Koyo achieves with Oribe type glazes based on kiln position and the amount of oxygen available. 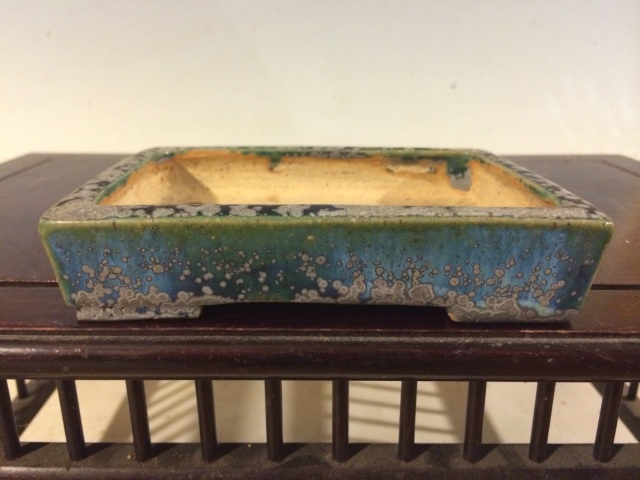 A fantastic Oribe glazed rectangle from the collection of friend of the blog and maple master extraordinaire Matt Ouwinga. Excellent patina on this piece. I’d be hard pressed guessing this was a Koyo and not a Shukuho. 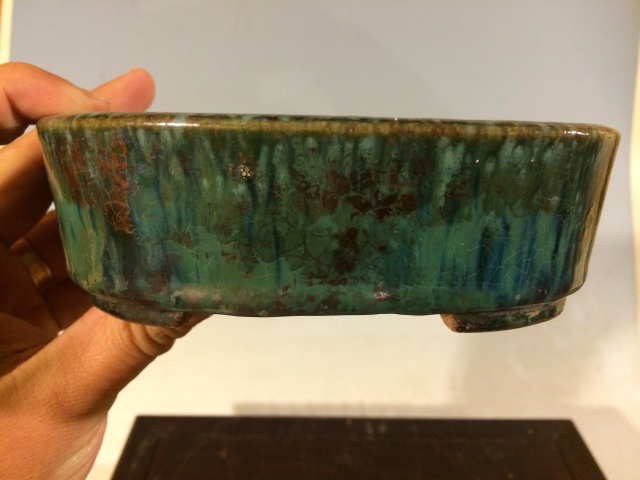 Another from Matt Ouwinga’s collection, a very early edition in a cool Canton type glaze. The highlights of blue and even gold in the multifaceted green crackle are outstanding.

A unique cut cornered dual tone glazed rectangle with heron and octopus facade carvings. Very interesting glaze, the darker side would be the side that faced the fire in the kiln.

This piece features a Takatatori Yu type glaze, like Oribe, it is another that Tofukuji was famous for, and Kouichirou San also proves quite skilled with it. 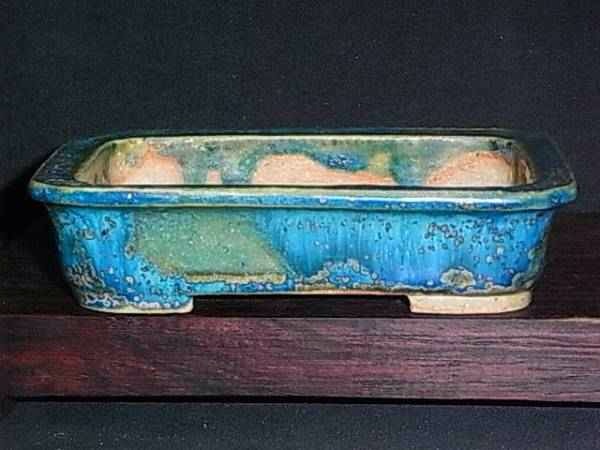 A really beautiful Oribe showing quite a bit more blue than is normal.

Another 6 sided pot in a Canton style Green glaze. The difference In tone with the previous Canton green 6 sided pot is remarkable. 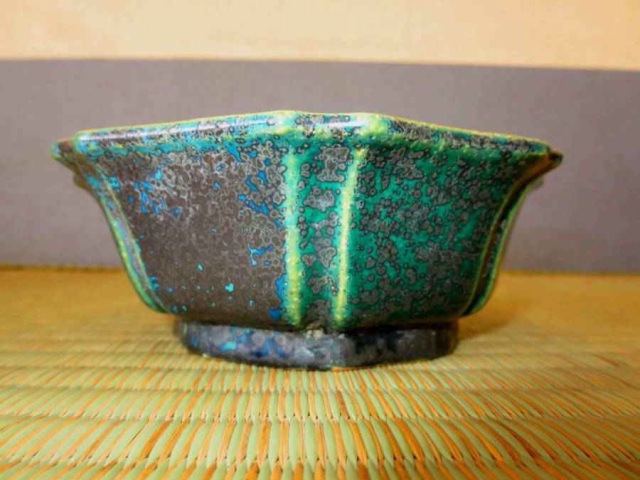 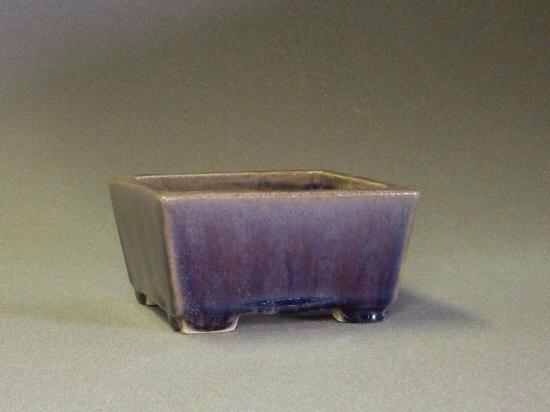 A really nicely glazed semi cascade type square, also in a Canton red type glaze. The very soft and warm glaze on such a strong and angular pot is interesting.

Last up for the First Generation of Koyo Toen we have another Canton Ruri type of glaze with pinkish red highlights. Very unique and lovely color combination.
Kouso Koyo

A really interestingly glazed Kusamono pot. I haven’t seen this glaze on any other Koyo pots, perhaps it is Kouso’s own recipe. 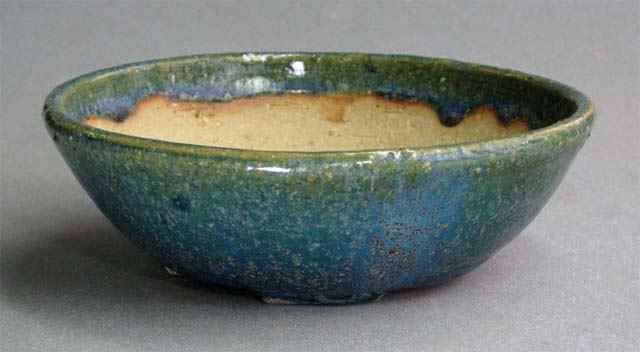 This is the most common example of pots made by Kouso, Aiba Kouichirou’s wife. Thrown on the wheel or pinched, these pots are often finished with some of Koyo’s signature glazes, and are a deal for the price.

A similar piece to the above, but in unglazed brown. 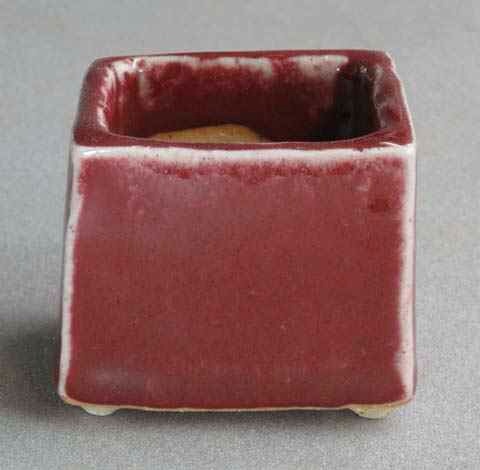 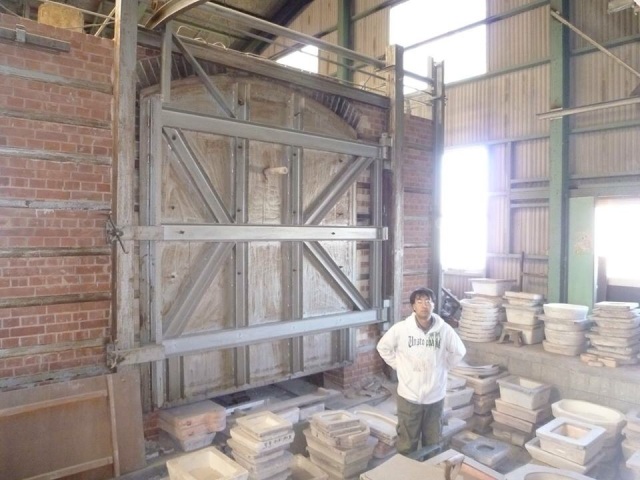 Kuniaki Aiba stands among his wares with the Kiln built by his father in 1970.

A display of pots from Jukosan at this years Shuga Ten Shohin Bonsai show.

A really nice Oribe Suiban from Jukosan. The son has definitely inherited the skill of the father!

A uniquely glazed rectangle in blues and indigo. Simply lovely. 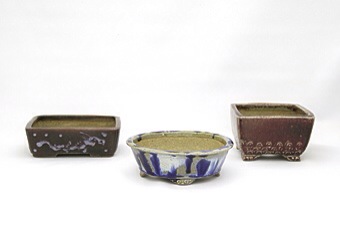 Jukosan’s entries in the 2012 and 2013 Shohin Bonsai Association’s pottery exhibition held during Gafu Ten in January. These entries really show Jukosan’s versatility as a potter. 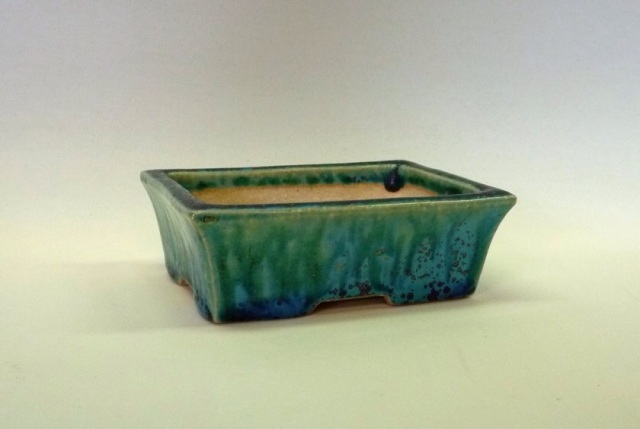 A Canton Green glazed rectangle. Very nice glaze and the blue highlighting to the right is exceptional. 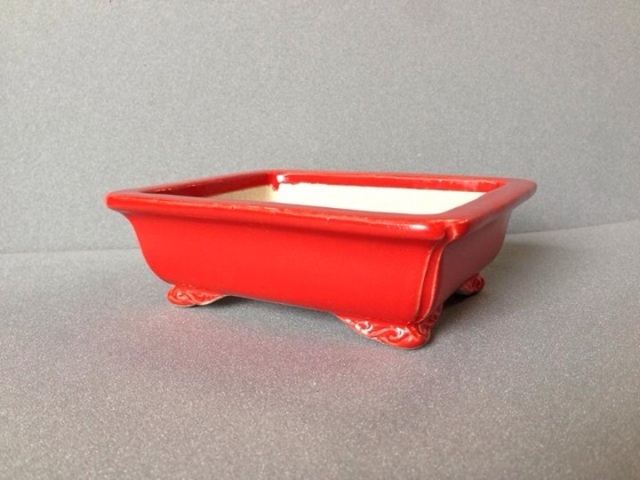 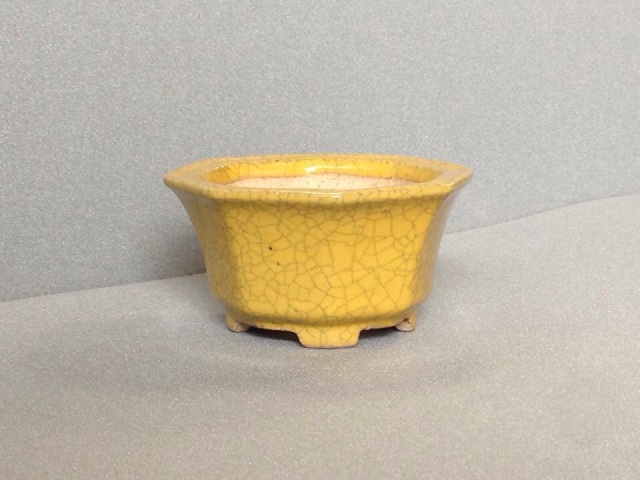 A simple yellow crackle. Not nearly as showy as some of these others but one of my favorite glazes from the kiln.

A nail carved rectangle. Jukosan is certainly multi Talented!! The nail carving style reminds me of Kouzan or Chazan.

A Canton Red glazed rectangle. Great depth and warmth to the glaze make it something better than what you get in red from many other potters. 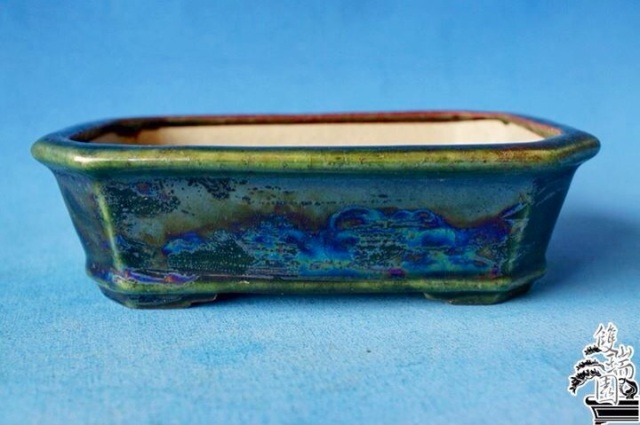 This one comes from the collection of my friend 陳瑞堂. A really spectacular green shot through with mottled patches of deep blue. A very exceptional glaze.

Last up for Jukosan, we have this rectangle. There’s so much going on here I don’t know where to start! The tiny details like the asymmetrical drips of the rich green overglaze, the tiny rivets at the inset corners, and the cloud foot peeking through on only one side, all combine to make this container a piece of rare excellence. Still quite a young man(at least I hope he is, he’s only a couple years older than me!) we’ll be seeing excellent work from Jukosan for decades to come.

Thanks for reading! Several more articles in the works this week, including Imaoka Machinao, Hayashi Mokuu, and a much asked for apparently overdue piece on the Yamaaki lineage. Stay tuned!

5 Responses to Bang For Your Buck Potters 2: Koyo Toen(鴻陽陶園)